Drones are now established tools in the agriculture business, boosting the productivity of farms with timely aerial data. But aside from gathering vital insights on crop health and enabling the creation of detailed NDVI and RGB maps, flying robots are taking an active role in day to day operations. Spraying drones are being used for the application of:

And they are doing so in ways that are cheaper, faster, and more accurate than traditional methods.

The application of agrochemicals is a cornerstone of modern farming. It’s a delicate balancing act that requires speed, care, and precision. Introducing the right chemicals in the right quantity in the right locations and at the right time is a constant challenge for farmers. Too high a concentration in one place can lead to unnecessary costs and decrease the quality of produce. Too low a concentration can leave crops exposed and undermine yield. 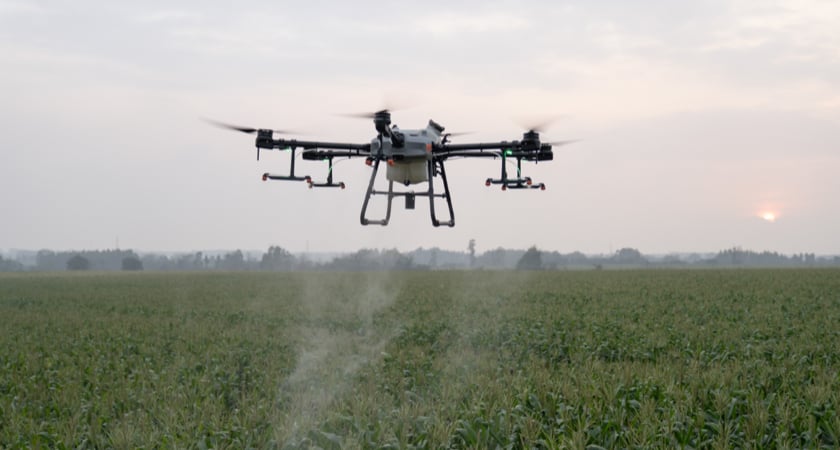 DJI’s spraying drones are deployed around the world as farmers tap into the latest technology to distribute chemicals accurately, evenly, and efficiently. Across the board, drone spraying contributes to a reduction in the costs required to apply agrochemicals – either through manual labor or hired equipment – reduced chemical exposure, and in some cases higher crop yields.

Carrying a significant amount of liquid is very different from carrying sensors, cameras, and the other standard payloads you’d expect to see on a DJI drone. To develop a reliable and accurate flight control algorithm, DJI engineers had to account for the momentum of liquid as it sloshes around the tank during operation.

This engineering challenge was complicated by the fact that the impact of the liquid’s momentum is constantly changing, as it gradually leaves the tank and makes way for more oxygen. 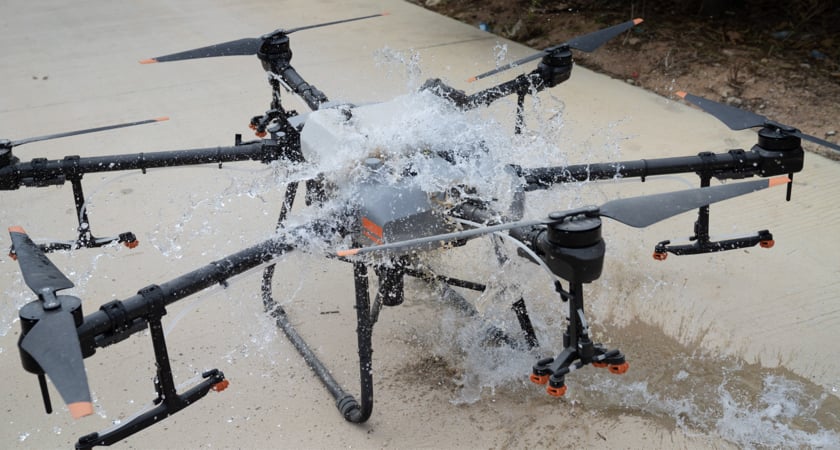 Demonstrating the water-resistance of the T30 which boasts IP67 protection

The ability to automate the dispersal of agrochemicals with a high degree of accuracy is a huge step in digitizing agriculture and smarter farming. The latest drone in the AGRAS lineup, the T30, offers a 40kg capacity, a 50kg per minute flow rate, and a spreading reach of 7 meters. That equates to potential coverage of 40 acres per hour, and an enormous productivity boost for usually-manual tasks that demand fast and accurate distribution.

And it’s not just pesticides and fertilizer that DJI’s AGRAS drones can be used for. The technology can be deployed to spread seeds, animal feed, and herbicides. The latter is a particularly important step for managing crops such as cotton. Automated, targeted herbicide spraying can speed up defoliation, remove excess foliage, and simplify the cotton harvesting process. 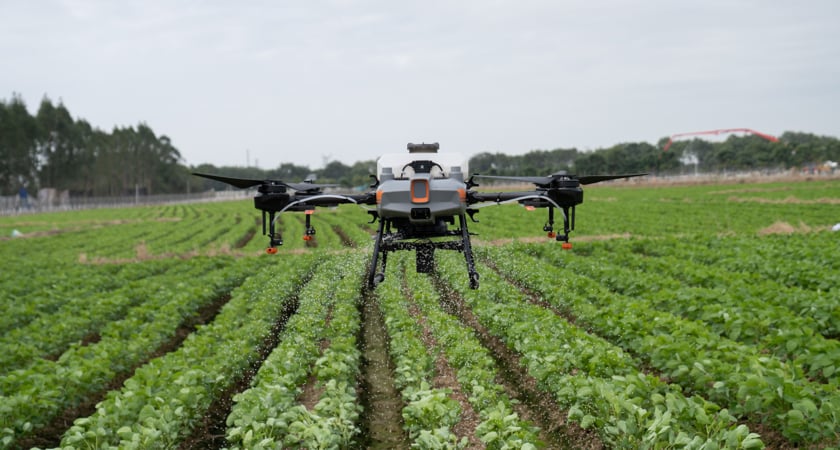 At Kloubec Koi Farm in Iowa, drone specialists Aerial Influence adapted a DJI AGRAS drone to feed 80 acres worth of fish. The solution was fast, effective, and automated.

And in a groundbreaking 2019 experiment, scientists used an adapted Agras MG-1S to reduce the transmission of Malaria in Zanzibar, Tanzania. The drone sprayed a series of rice paddies with a biological control agent, which sits on the surface of standing water to prevent freshly hatched mosquitoes from leaving. A DJI R&D team modified the drone to distribute a liquid more viscous than the usual pesticides, as part of a solution that could have enormous repercussions for the deadliest disease mankind has ever known.

DJI builds drones of all sizes and for all sorts of applications, from palm-sized FPV racers to the heavy-duty Matrice 300 RTK. But our single biggest drone is the AGRAS T30. That’s because when it comes to meeting the challenges posed by modern farming, size matters. Weighing in at 24.6 kg, almost 3m across, and with a maximum potential takeoff weight of 76.5 kg, the T30 is simply an incredible feat of agricultural engineering.

Alongside its size and payload potential, the AGRAS T30 is equipped with a spherical omnidirectional radar to support obstacle avoidance in the horizontal and overhead directions, terrain adaptation, and altitude maintenance. The T30’s spraying system is designed to speed up agrochemical distribution with enhanced accuracy. A 16-nozzle layout and a flow rate of up to 8 liters per minute – combined with the T30’s speed and maneuverability – mean farmers can spray up to 40 acres per hour. 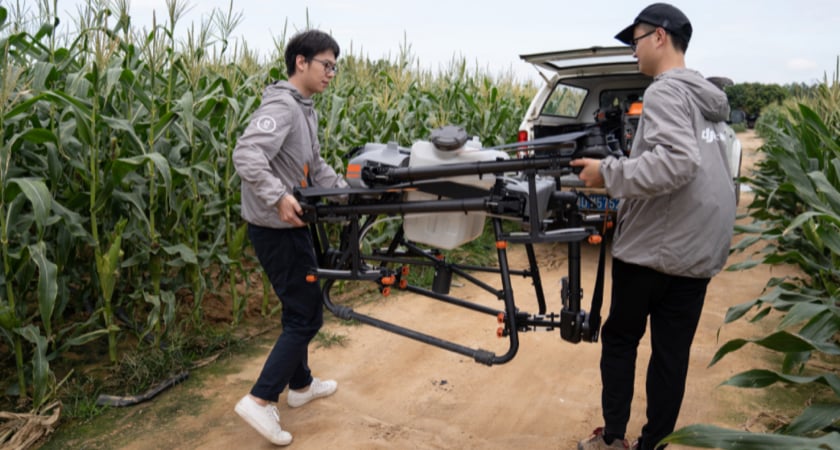 Japan is the world leader for spraying drone adoption

Given the country’s reputation as a technology pioneer, it’s no surprise that Japanese farms are among the most advanced anywhere in the world. Research from the Tokyo University of Science highlighted the impact that drones are having across the board.

In recent years, spraying drones have gained a huge amount of traction for the distribution of pesticides. Across Japan, the number of hectares sprayed by drones saw a 45-fold increase between 2016 and 2018, with the number of registered UAVs for agricultural spraying rising from 227 to well over 1500. All indications are that those trends have continued to the present day, particularly with major advances in drone technology and increasing leeway for heavy-payload applications from regulators.

Japan’s spraying drone adoption isn’t just another example of a country ahead of the curve. An aging, shrinking population means there is less cheap labor to carry out agricultural tasks, while Japan’s relatively small landmass means that small-scale farming operations are common. Both of these factors have been drivers for the adoption of DJI AGRAS drones. 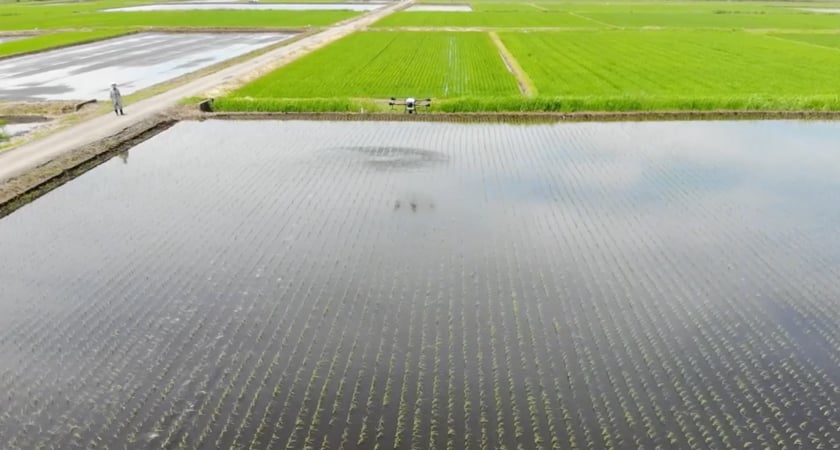 The biggest barrier to further spraying drone adoption is legislation

Our crop spraying AGRAS range, including the new T30, the T10, T16, and the T20, has proven itself around the world. However, some jurisdictions have been slower to grant leeway for Beyond Visual Line of Sight (BVLOS) and swarm operations for drones of this scale and/or when agrochemicals are part of the equation.

In the US, UAV agriculture specialists Rantizo have led the way, becoming the first company approved by the FAA for nationwide swarming for agriculture spraying. In Malawi and Mozambique, spraying drones from DJI are being introduced as part of efforts to make agriculture more cost-efficient, environmentally friendly, and less indiscriminate when it comes to spraying potentially hazardous chemicals.

EU-wide targets aim to halve the use of chemical pesticides by 2030. Achieving such a drastic decline without compromising on crop yield will rest entirely on smarter and more precise farming methods. Crop spraying drones offer one avenue for more targeted agrochemical application, particularly in vineyards, orchards, and crops in steeply sloped areas. 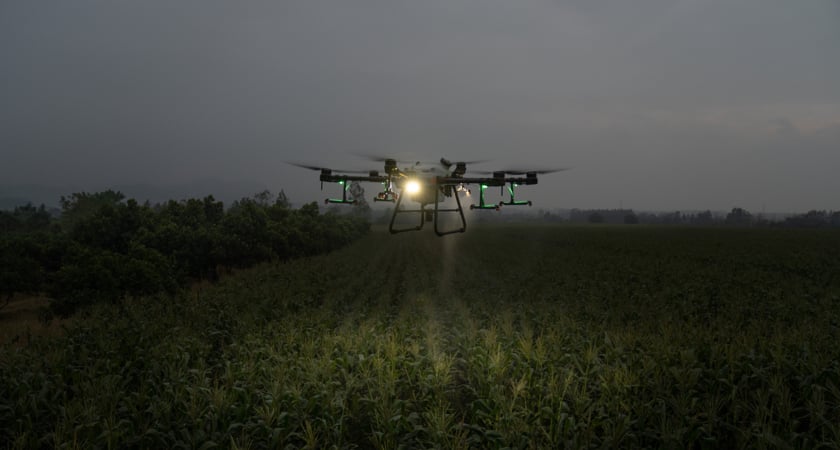 Precision agriculture, around the clock

Spraying drones are powerful tools that farmers can deploy to speed up and automate manual processes. And the result of that core functionality is a gamechanger for the future of agriculture. This technology enables vital aspects of precision farming to take place around the clock.

Although regulations have been slow to adapt to what is possible from a technical standpoint, the hardware is ready to deliver. The new DJI AGRAS T30 is a case in point. Its intelligent batteries can be fully charged in just 10 minutes, allowing for continuous operation. Combined with insights generated by tools like the P4 Multispectral, spraying drones can help farmers work smarter, faster, and with greater precision than ever.

Head to our Drones in Agriculture blog for more information on how UAVs are impacting the world of farming.

NOTE: this article was fully reported  by DJI.com from: Malek Murison