A remarkable event: the first autonomous drone flight in Italy has been carryed on in the road tunnel “La Motta Nord”, located in Vibo Valentia, in collaboration with ANAS S.p.A. Area gestione rete A2.

The activity consisted in two separate phases: the flight -during which the data were acquired- and the post-processing.

An extraordinary showcase of technologic innovation, digitization and the fusion of various technical skills allowed the young team of DRON-E, based in Catanzaro, to offer a geometrically accurate model of the road tunnel La Motta Nord, located in Stefanaconi (VV), in just 20 minutes.

Anas S.p.A., well known Italian group committed to managing of roads and highways infrastructures in Italy, always keen on new technologies to increase the efficiency of their services,  allowed our staff to operate in the tunnel, closed to the traffic during the night for mainteinance, in order to obtain pointcloud, sections and digital twin.

To reach this result, if the road hasn’t been already closed for mainteinance, it would have been required to restrict the road traffic for at least two days and have at least two specialized inspectors on the field.

Instead, Anas decidet to opt for an experimental approach, supporting the first autonomous drone flight in a road tunnel in Italy. The complete operation lasted a little under an hour. 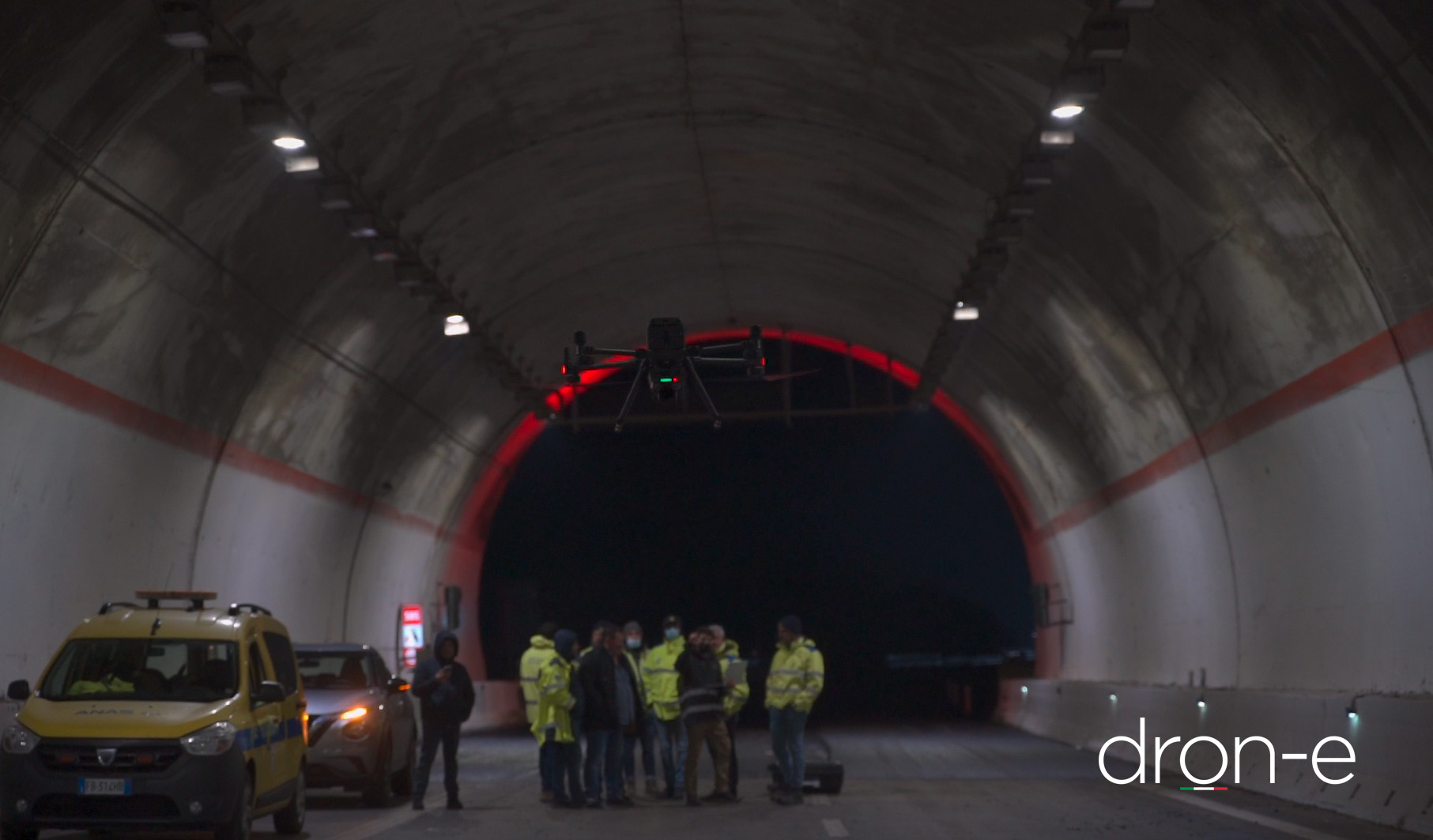 The tunnel, closed to the traffic and already delimited, extends for about 450m and has a diameter of 13.50m.
To avoid any prolungated denial of service, ANAS S.p.a. decided to overcome some of the “traditional” laser scanner survey methodology down sides and adopt a SLAM based LiDAR.

This technological innovation ties together China, Australia and Italy.

The drone, DJI Matrice 300 Rtk enterprise series from DJI (China), the Hovermap LiDAR from the new-born star Emesent Pty Ltd have been masterfully piloted from the Italian pilots of DRON-E, company specialized in aerial surveys and technical inspections with drones.

The drone, taking advantage of the advanced planning algorithms and Artificial Intelligence of the LiDAR, has completed the activity in full autonomous mode in just 20 minutes. 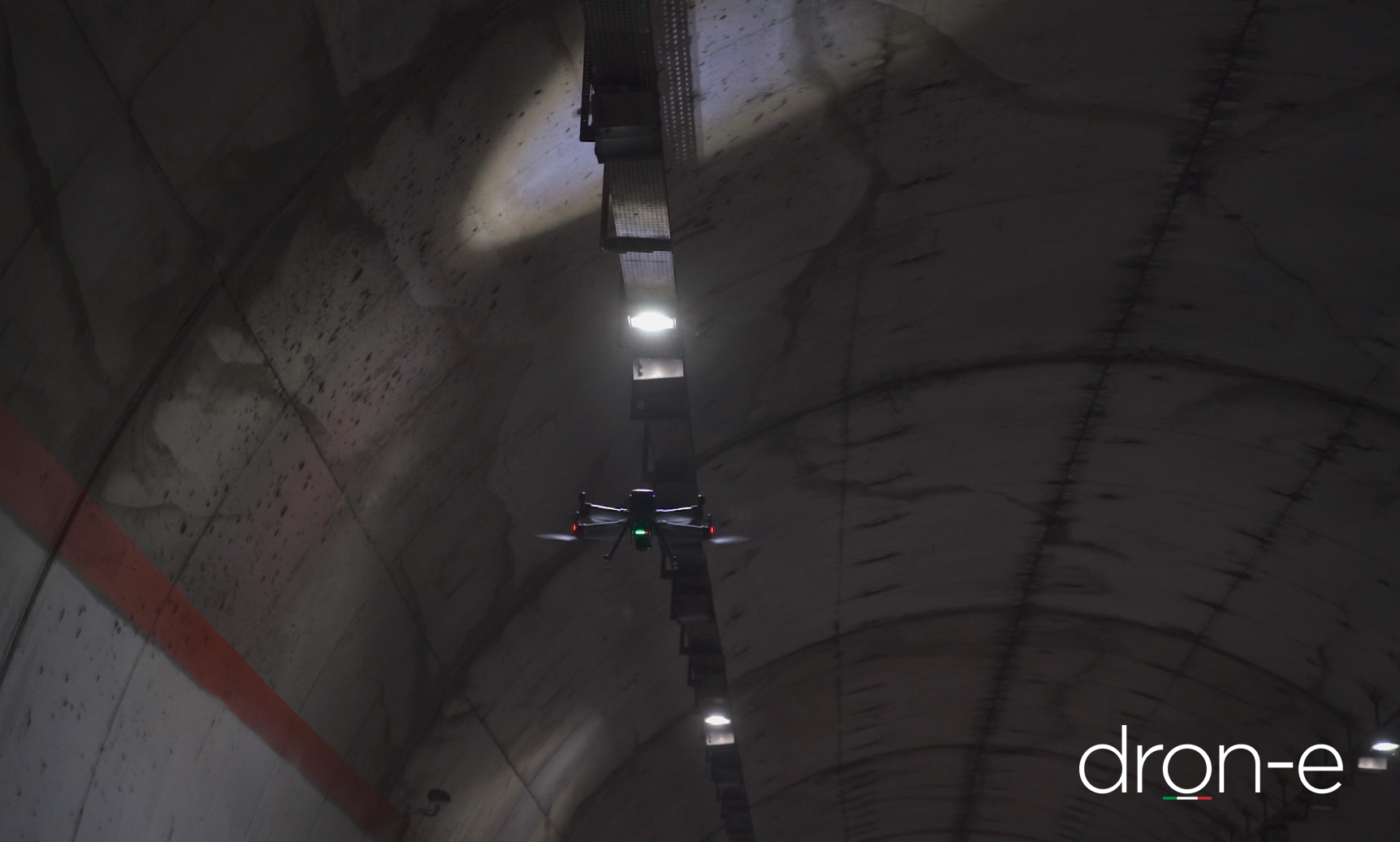 Being an extremely versatile mobile mapping system, Hovermap  can be mounted on a backpack, on vehicles, in a protective cage and in last generation robots and drones.

Using its real-time processing capabilities, Hovermap offers the pilot unparalleled collision avoidance capabilities; Hovermap is able to stop the drone thanks to its 360° obstacle recognition (as small as 2mm in diameter) and to keep the drone stable in any enviroment (confined or in open space), even in GPS denied  infrastructures, such as a tunnel.

During the activities, Dron-e showcased how a survey can be carryed on in respect of the highest security standards and in a timely and efficient way thanks to Hovermap LiDAR with SLAM technology.

What does SLAM mean and how does it work?

SLAM is the acronym of Simultaneous Localization and Mapping and is a sotware solution used by autonomous systems to build a map and localize itself inside it, even with no initial informations about the enviroment or the system position in it.

The result appreciabile in the following images; the Dron-e team has been able to deliver a high quality point cloud of the tunnel, and through automatic extraction, it has been possible to deliver sections and digital twin.

The automatic extraction procedures have reduced the processing times considerably, allowing the technicians to acces to the informations in less than 24h. 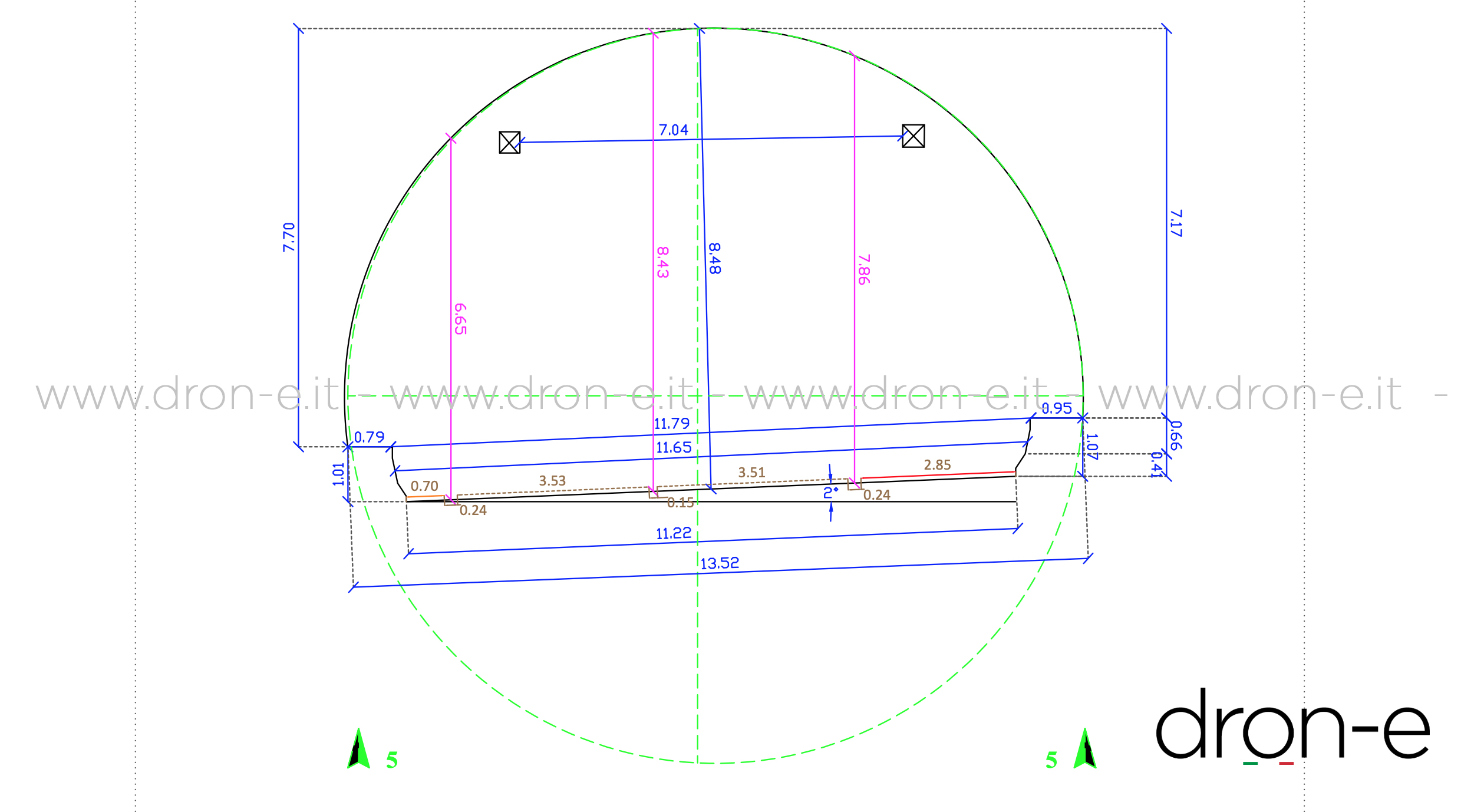 The post-processing activity took about 50 minutes, in addition to 2 working days to deliver the following digital twin.

Dron-e has developed a methodology of acquisition, processing and modeling that allows to develop a BIM model directly from point clouds.

The capability to deliver a parametric model, with the possibility to generate other submodels (architectural – structural – plant)  and the deep correlation with a database that contains not only geometric informations, but also descrittive details on the current status, the mainteinance and future developments, showcases how revolutionaire the use of Hovermap can for every 3D Survey expert.

Dron-e is an Emesent authorized reseller. For more informations, dataset, datasheets,you can visit the dedicated page or call +39 0961770591.

If you have a project, want to test the product, or undestand its possibilities,  contact us!